In the 4th International Scientific and Training Conference “SELECTED VENTILATION AND FIRE ISSUES IN COAL MINES” organised by The Association of Mining Engineers and Technicians Central Mining Institute (SITG GIG) in Katowice and sponsored by AZIS Mining Service and Termospec – in beautiful buildings of SPA Hotel Laskowo among enchanting Racibórz Forests – 96 participants from the world of science and industry from Poland and the Czech Republic took part. END_OF_DOCUMENT_TOKEN_TO_BE_REPLACED

Between 24 and 26 September 2014 on the premises of SPA Hotel Laskowo in Jankowice Rudzkie the 4th SCIENTIFIC AND TRAINING CONFERENCE “SELECTED VENTILATION AND FIRE ISSUES IN COAL MINES” took place. END_OF_DOCUMENT_TOKEN_TO_BE_REPLACED 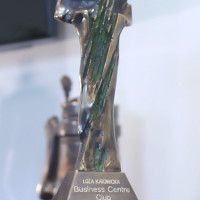 The Cesar of Silesian Business

On 31 August 2014 on the premises of Zameczek Myśliwski Promnice the President of the Management Board, Mr. Marian Lasek received “The Cesar of Silesian Business 2014” as the winner of the competition for the leader of Silesian business organised by the Katowice Lodge of the BCC. END_OF_DOCUMENT_TOKEN_TO_BE_REPLACED 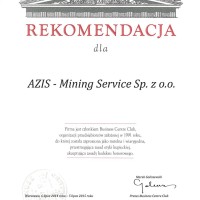 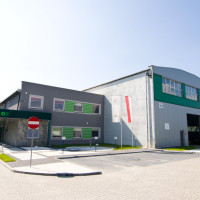 New head office of the company

We are pleased to inform that from January 2014 the head office of our company was moved to a new administration building and production room in Wodzisław-Śląski – Wilchwy in oś. 1 Maja 16K. END_OF_DOCUMENT_TOKEN_TO_BE_REPLACED